Best described as Soulful Americana, Country Folk with a Honkey-Tonk edge; singer, songwriter, and guitarist Mike Addington began his professional career as soon as he could enter a bar. Mike picked up the guitar at the early age of 6, and never doubted his calling.

A veteran of honky-tonks, nightclubs, concert halls, and festivals, Mike has opened for many acts including Asleep at the Wheel, Leon Russell, Cross Canadian Ragweed and shared the stage with greats Joe Ely, Gary P. Nunn, Freddie Fender, Keith Sykes & Kevin Welsh (to name a few). A voice all his own and a guitar style second to none, Mike crafts songs that speak to a common thread among all of us. Observation and raw emotion are the primary tools he uses when writing.

Mike’s extensive repertoire runs the gamut from the roots of country music to the modern troubadours of today. A shirt-tail cousin of Maybelle Carter (nee: Addington), music runs through Mike’s blood. He learned to play chords by watching his Dad on guitar and Uncle Hobie on banjo. At six years old, his fingers barely reached across the neck.

Born in Illinois to West Virginian parents, Mike moved to Southern California when he was 13. His Appalatchian roots had to come to terms with the existing Califoria cool. He soon found his niche through music. Honing his skills in bars and after hour joints of Southern California, he formed bands and played with some of Los Angeles’ top sidemen for many years.

Giving up the rat race of LA, Mike moved to Red River, New Mexico in the mid 2000’s. Here he found a music scene rich in history and honest beauty that he had been longing for. Now an alumni with the likes of Ray Wylie Hubbard, Michael Martin Murphy, Michael Hearn and Don Richmond, Mike is proud to be a part of the ongoing musical heritage of Red River. This is the real deal, so sit back, listen and do enjoy. Prepare for your feet to move and your heart to melt, Mike’s a pickin’....

Horizon and Main was recorded in The Howlin’ Dog Studios by Don Richmond. All music and lyrics for the CD were written by Mike. From the slightly bluesy title track to the ballad “One Lonesome Cowboy”, he goes straight to the heart of the moment. Mike currently has plans to return to the studio for his second CD with an anticipated release date of December 2012. 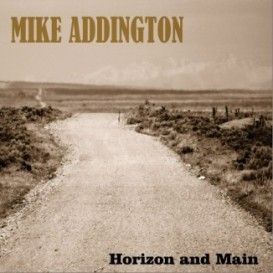